‘What Hanoi-ce Trip!’ – Our Corporate Getaway in Hanoi, Vietnam Any normal summer getaway would often involve swimming, beaches, or intense outdoor activities, but as always, the Gotafflair squad wanted to be different.

After several months of planning, we found ourselves on the charming city of Hanoi in Vietnam, braving the surging scooters, the steep staircases, and the burning heat, for the sake of a memorable team building experience.

Hanoi is Vietnam’s capital that prides itself on its rich culture. One could easily recognize their commitment to heritage because of their architecture and customs that are both reminiscent of the French and Chinese occupation. Its cuisine also encompasses strong Chinese and French influence, with its distinct dishes that are now widely popular such as the hearty soup called phở and the baguette type of sandwich called bánh mì. You’d also be surprised with their burgeoning coffee culture as it is a huge part of their daily life. In fact, Vietnam is actually the second-largest coffee producer in the world!

Hanoi is a place that demands to be known not only for its interesting conical hats, blue plastic stools, and beautiful pagodas but because it consists a society that is proud to showcase everything they have to the rest of the world.

“Hanoi is a beautiful chaos that I will visit every now and then.” – Nicole, Marketing Manager

We kicked off our itinerary in Hanoi with a quick visit to the moneychanger and a local sim card store at the airport. Money and mobile data, after all, are the bread and butter of modern-day travelers. We noticed that the nightlife at the culture-rich capital started early so when we arrived at around 2 a.m., streets were already empty and all that was left for our stomachs was a 24/7 convenience store near our hostel.

Our first day started right after having an ample amount of sleep following our early morning check-in. Because we were free to do anything we want on this day, the Gotafflair squad was split into three groups, allowing us to enjoy the specific set of activities we had in mind. 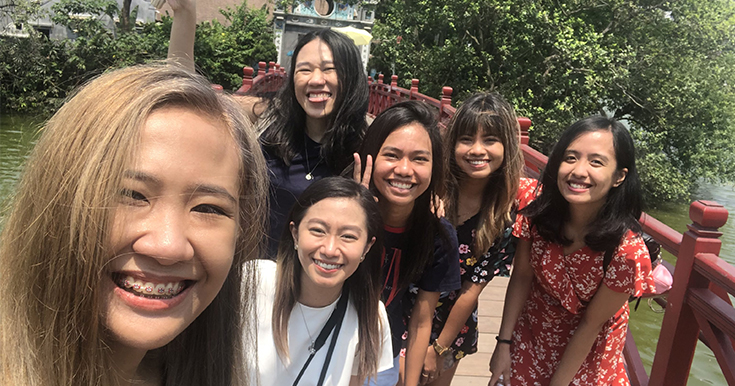 Group A (Nikki, Marinel, Kate, Marianne, Elaine, Patricia) spent the whole day strolling around the city to try Vietnam’s egg coffee as well as its local sausage, egg tart, seafood fried rice, and spring roll. In between their hunt for these dishes, they found themselves wandering around Hoan Kiem Lake, Temple of Jade Mountain, Train Street, and even at the Hoa Lo Prison, a museum that was used as a prison by the French colonists for political prisoners. 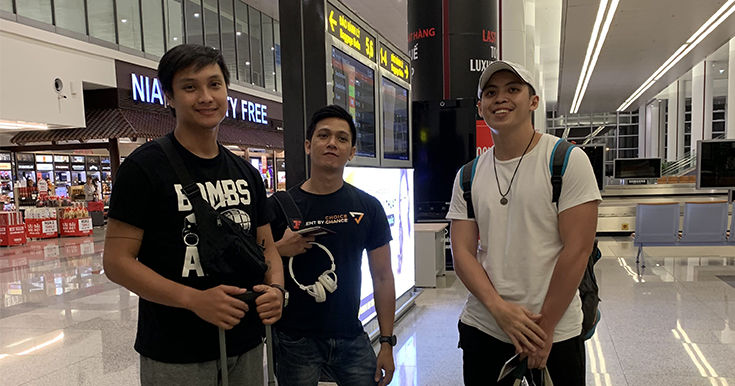 Group B (Jericho, Hanz, RJ), meanwhile, dedicated their time to check out some motor shops to accommodate their fondness towards motorcycles. They, then went on to visit most places that were ticked off by Group A, even bumping into fellow Filipinos while they were on Train Street. 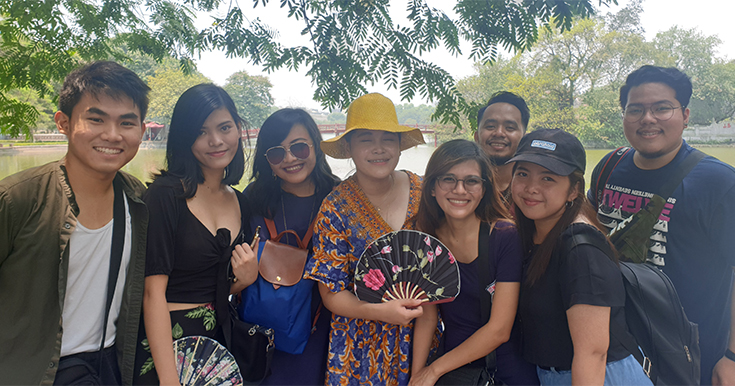 Take note that our first day wasn’t some sort of Amazing Race competition wherein the group with the most number of visited destinations would win. But if it were, the winner would’ve been Group C (Nicole, Kenneth, JC, Ryan, Kirsten, Edwin, Ena, Aiza, and Sheki) since they used their time well, marking 7 destinations on their itinerary including the famous Bun Cha Hoa Lien that was visited by former U.S. President Barack Obama and the late Anthony Bourdain. Since then, the restaurant became so famous that locals named it, “Bun Cha Obama”! Nicole and Kenneth even spent some time to watch John Wick 3 at Tràng Tiền Plaza because of the scorching heat. Meanwhile, the rest of the group went to cool off by watching a Water Puppet Show at Thang Long Water Puppet Theatre. 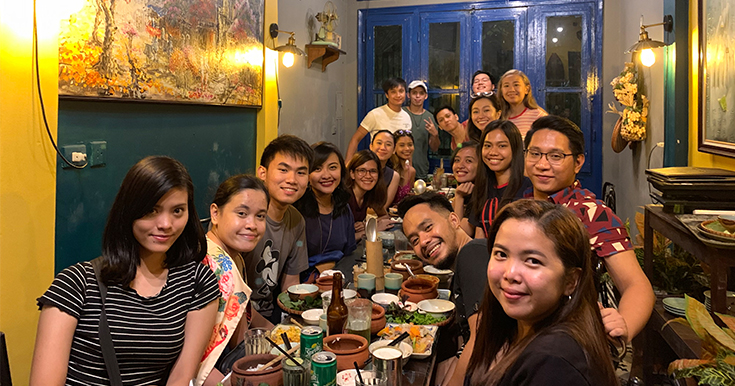 “The first day was the highlight of the trip for me. It was a satisfying change of pace to experience the unique culture and scenery.” – Kenneth, Senior Web Designer

On the second day, the team headed onto the famous Ha Long Bay, enduring a 3-hour bus ride from downtown Hanoi to the port of the renowned UNESCO World Heritage Site. We devoured a feast that contained lush seafood and vegetable dishes, not knowing the worst was yet to come the next day. 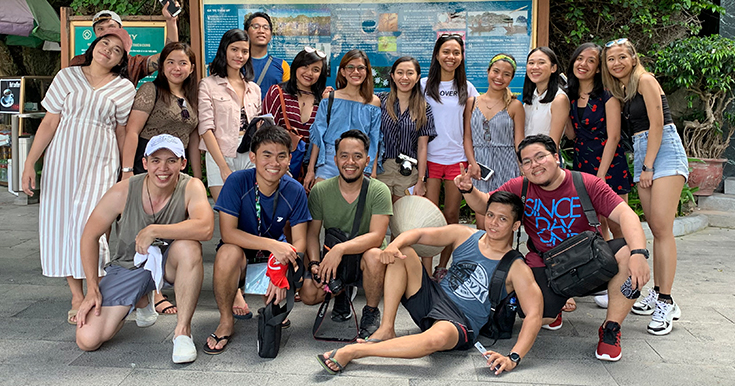 In our 5-hour cruise on Ha Long Bay, the squad had the privilege to marvel at the view inside Sung Sot Cave as well as the captivating sights of other islands. We rode small boats through shallow waters, took pictures, and made good use of the watercraft’s slow pacing to wallow the magnificent rock formations. The weather was much hotter than Manila’s to the point that most of us were tempted to dive in on the emerald waters of the bay. But even then, we still reveled in the beauty of nature around us.

We went back to downtown Hanoi for a quite fancy dinner, a stroll at the night market, souvenir shopping, and of course, for some late-night casual drinks.

“I enjoyed Ha Long Bay because this is where I got the chance to bond more with my colleagues.” – Kate, Junior Art Director

True enough, it took plenty of hours before half the group’s digestive system reacted to whatever they ate from yesterday. As of writing, we still have no idea which food caused their food poisoning, but we’re eyeing the half-cooked shrimped that they gobbled up with confidence. And while others were lying down on the beds of a sleeper bus en route to Hanoi’s suburbs, these people were confined to the beds of our hostel, enduring stomach pains for the whole third and final day.

Perhaps, this is where the real team building activity happened because it gave some of us the opportunity to stay in the hostel to accommodate our food-poisoned friends. In between hours, these people would leave the building to grab a bite, take pictures, or buy souvenirs, but would return quickly to attend to a colleague’s needs. With enough medication and care for each other, we endured every setback we encountered in the trip.

This is a team adventure that made us realize the value of preparedness, resourcefulness, and bond. For some of us, visiting Hanoi is a once-in-a-lifetime experience, a vibrant memory that they will carry for the rest of their lives. Looking back, it truly is amazing how three days packed one crazy, unexpected ride. With lessons, stories, and photos to share, we are now once again armed to face new adventures, together. 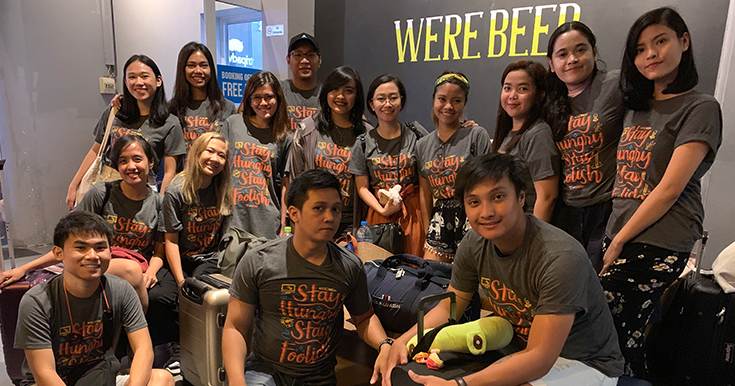 “Despite the scorching heat and other unfortunate circumstances, it was a fun and memorable trip.” – Nicole

“The Hanoi Team-building is not the typical team building full of activities yet was definitely filled with memorable and fun experiences.” – Sheki

“It was a great trip for all of us because it strengthened our bond as colleagues and discovered more about ourselves.” – Kirsten

“It’s different from the past team building activities. It’s more adventure-filled and it made me feel responsible for the team.” – Elaine

“It felt more of a vacation than a team building activity, making the whole trip more fun and relaxing since our minds were only set to spending the whole time bonding with my coworkers.” – JC

“It’s my first time to travel abroad, that’s why it’s very memorable to me.” – Aiza

“Aside from being fun, it was a learning experience for me because this is our first time to organize a team building all by ourselves.” – Kate

“It was a great opportunity for the relatively new employees to socialize among their seniors and others who have stayed longer in Gotafflair.” – Kenneth

“The highlight of the team building for me is the team enjoying each other’s presence without thinking about office works. For me, it helped us to be more open and comfortable with each other.” – Jericho

Get In Touch With Us